M Health Fairview CEO James Hereford has undercut Minnesotans’ healthcare. As leader of a major health system, Hereford has cut services, implemented a barebones model of staffing, and brought for-profit healthcare to the state. For more than six months of negotiations with nurses, Hereford and other M Health Fairview executives have dug in their heels and refused to improve conditions in their hospitals.

Since taking the chief executive position in December 2016, Hereford has taken a successful healthcare system and turned it into a cash-tree for himself and other executives at the expense of patients and bedside workers. Since 2017, Hereford has taken a 91 percent raise, bringing his total compensation to more than $2.6 million. 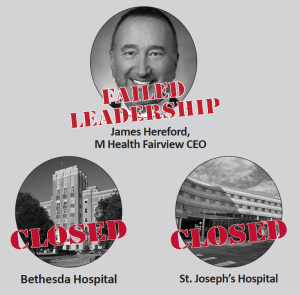 In 2017, Fairview acquired HealthEast, a system whose hospitals have long served low-income communities and communities of color in the East Metro. Since buying out these hospitals, Hereford has slowly chipped away at the community service model under the guise of a “bold new vision.” During the pandemic, Hereford shut down Bethesda and St. Joseph’s hospitals less than a year after writing an op-ed in the Pioneer Press about an “affordability crisis” in healthcare.
Equally disturbing, Hereford has also helped bring for-profit healthcare companies to Minnesota through joint ventures with AccentCare and Acadia Healthcare, a company with a spotted track record. Acadia Healthcare will have 85 percent ownership in their new venture with M Health Fairview, a clear move towards a profit-first approach to healthcare from Hereford.

As healthcare has become more expensive, Hereford has taken in more and more compensation, receiving a 91 percent increase in total compensation since 2017. At $2.6M, he earns more than 30 times the salary of the average nurse in the Twin Cities. While most nonprofits do not compensate their board members, M Health Fairview does. Board members were compensated in 2020, even after Hereford told frontline workers that they had  “given up their board compensation for the year.” This reversal is especially disturbing as it came the same year that Hereford and other executives eliminated 900 jobs.

James Hereford built his reputation by applying the barebones “lean” model of staffing to healthcare, a theory of management that involves identifying and ‘removing waste and inefficiency’ under the guise of ‘adding value.’ Yet, Hereford has made decisions that run counter to this model’s thinking by spending as much as $20M on replacement nurses during a three-day strike rather than settle fair contracts with MNA nurses.

Nurses Have No Confidence in James Hereford: Should You?

M Health Fairview nurses across Minnesota overwhelmingly voted no confidence in CEO James Hereford. Nurses at the bedside do not trust in the leadership and priorities of Hereford and M Health Fairview executives.

PUT PATIENTS AND NURSES BEFORE PROFITS

Call CEO James Hereford and demand he settle a fair contract with nurses or step aside: